RADAR stands for RAdio Detection And Ranging. Invented just before World War II for military purpose, it has since been applied to many areas, an important one being weather monitoring. Through detecting raindrops in the atmosphere, the weather radar is a very effective tool for monitoring severe weather such as tropical cyclones, thunderstorms and heavy rain in Hong Kong.

Doppler weather radar has become increasingly popular in recent years. It is capable of measuring the approach (or departing) speed of raindrops. The Doppler principle can be explained by noting the change in pitch of an ambulance siren. The pitch heightens as the ambulance approaches and lowers as it departs. In other words, the faster the ambulance approaches, the higher will be the pitch. For the case of a Doppler radar, the faster the raindrops move towards the radar, the higher will be the frequency (i.e. pitch) of the microwave reflected from raindrops (Fig. 1). The raindrops' approach speed is determined by the frequency shift, and provides a good estimation of the winds, which carry the raindrops. 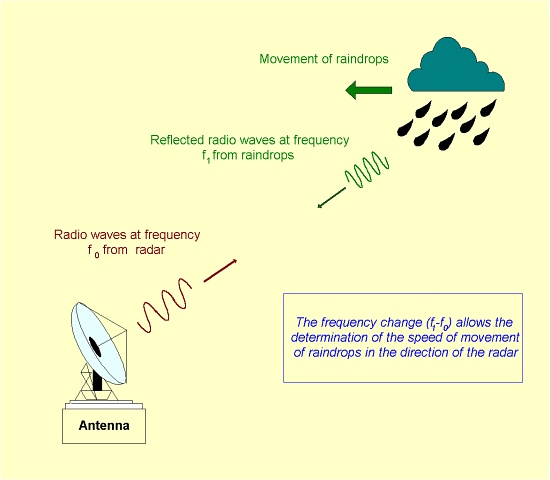 The Hong Kong Observatory's (HKO) first weather radar was installed at Tate's Cairn in 1959. The Decca 41 radar was equipped with a monochrome cathode-ray tube (CRT) for displaying rain areas. A Plessey 43S radar was installed in 1966 adjacent to the first one. Apart from making horizontal and vertical scans of the atmosphere, it was equipped with electronics which allowed the attenuation of echo intensity on the CRT display through different preset gray levels, thus enabling the forecaster to estimate the intensity and vertical extent of rain areas.

The first computer-based radar was implemented in 1983 to replace the Decca radar. It displayed radar pictures in different colours according to the rain intensity, resulting in much improved user-friendliness to the forecaster. Apart from making 3-dimensional scans of the atmosphere, it also featured such products as animated display of radar pictures and forecast radar picture based on extrapolation of rain echoes. These features enabled the forecaster to follow the movement and development of rain areas more effectively. (This radar was decommissioned in 2000.)

HKO installed in 1994 its first Doppler weather radar (Fig. 2a) to replace the Plessey radar. In addition to measuring the rain intensity, the Doppler radar also provided valuable information on the speed of rain areas. This proved to be very useful in estimating the wind strength of tropical cyclones coming within radar range. 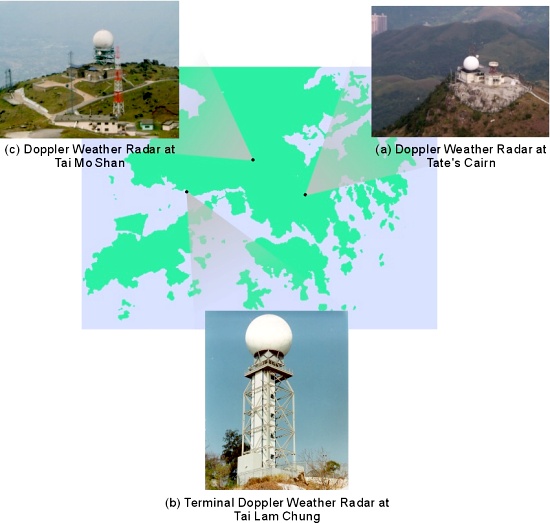 Fig. 2 Weather radar in Hong Kong and their locations.

In 1998, HKO implemented a Terminal Doppler Weather Radar (TDWR) at Tai Lam Chung, about 12 km northeast of the new airport at Chek Lap Kok. The TDWR (Fig. 2b) is specialized in detecting severe weather near the airport and provides alerts of microburst and windshear associated with convective storms (Fig. 3), thus ensuring safety for landing and departing aircraft under such weather conditions.

The implementation of a Doppler weather radar in 1999 at Tai Mo Shan (Fig. 2c) marked another milestone in the history of weather radar in Hong Kong. Scanning the atmosphere from the highest peak in Hong Kong, the radar is equipped with a large antenna (8.5-metre diameter) and a high-stability transmitter. By capturing data in high resolution, it provides a much clearer view of the storm structure, thus facilitating the forecaster's issuance of severe weather warnings.

Under severe weather situations, the combined use of both Doppler weather radar at Tai Mo Shan and Tate's Cairn enables a comprehensive radar picture (Fig. 4) to be drawn up, as the coverage of individual radar is limited in some sectors due to possible interference with other radar or blockage by terrain or nearby structures. It also allows the determination of a 3-dimensional wind pattern for Hong Kong (Fig. 5) based on the Doppler wind information obtained with the two radar. 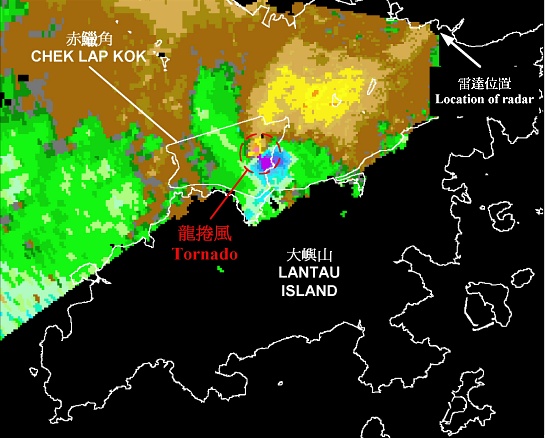 Fig. 3 Signature of tornado over the airport on 20 May 2002, as observed by the TDWR. Cool (blue, violet) and warm (yellow, red) colours indicate winds moving towards and away from the radar respectively. In this image, the sharp contrast in the colours within the red circle indicates opposing winds reaching about 90 km/h. 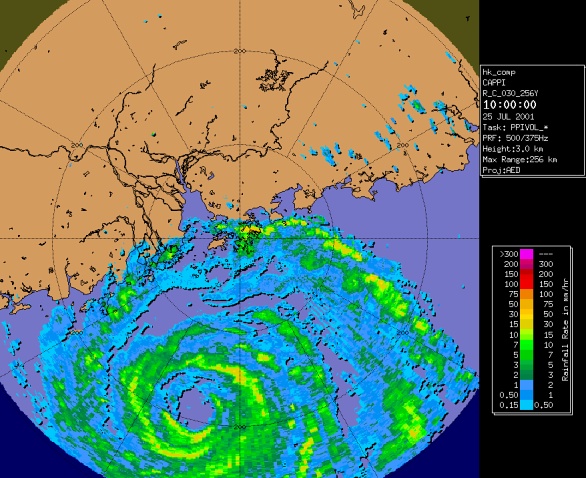 Fig. 4 Typhoon Yutu's eye was clearly revealed at about 200 km to the south-southwest of Hong Kong in the morning on 25 July 2001. The image is a composite of pictures taken by the Tai Mo Shan and the Tate's Cairn radar. Fig. 5 Wind pattern (at 1 km above the mean sea level) of a tropical depression centering over the waters to the east of Lantau Island, 18 June 2000, as derived from Doppler wind information obtained with the Tai Mo Shan and Tate's Cairn radar.

Radar information for the public and special users :

Radar images are from time to time presented by the Observatory's professionals in their daily weather programmes on the television and in special briefings to the media during severe weather conditions. Radar images are also disseminated to the aviation community for flight planning and operations. For the public, radar information similar to Fig. 6 is updated regularly on the Observatory's Internet website at https://www.weather.gov.hk/en/wxinfo/radars/radar.htm.

Fig. 6 A radar image captured by the Observatory's radar in the morning of 5 May 2003. It shows a band of heavy rain was affecting Hong Kong and part of the coast of south China. The Red Rainstorm Warning was in force.