The Weather of December 2019

Affected by the northeast monsoon over southern China, it was fine and dry in Hong Kong on the first day of the month. With the arrival of an intense replenishment of the northeast monsoon that night, winds strengthened from the north and local weather became appreciably cooler and very dry on 2-4 December. Meanwhile, Tropical Cyclone Kammuri moved across the central part of the South China Sea and weakened gradually on 4-5 December. Under the combined effect of the northeast monsoon over the coast of Guangdong and the rain-bearing cloud band associated with Kammuri, local weather became windy with a few rain patches on 5 December. With rain patches overnight, temperatures at the Hong Kong Observatory fell to 12.7 degrees on the morning of 6 December, the lowest of the month. As the clouds covering the coast of Guangdong thinned out gradually during the day, the weather in Hong Kong turned fine and very dry again on 6 December. Dominated by the dry northeast monsoon, apart from some cloudy interludes on 12 - 13 December, local weather remained generally fine and dry until 14 December.

Under the influence of a relatively warm and humid easterly airstream, the weather in Hong Kong became mainly cloudy on 15 - 16 December. With the clouds thinning out gradually, it was warm with sunny periods during the day on 17 – 18 December. The maximum temperature at the Observatory rose to 27.3 degrees on the afternoon of 18 December, the highest of the month.

With the northeast monsoon arriving at the coast of Guangdong later on 18 December, the weather in Hong Kong became mainly cloudy and cooler together with a few rain patches on 19 – 21 December. While sunny intervals emerged gradually on 22 – 23 December, the visibility was rather low in some areas. With the northeast monsoon moderating gradually, the weather turned generally fine and warm on 24-26 December. A cold front formed over central China and moved across the coast of Guangdong on the evening of 26 December. Affected by the intense northeast monsoon behind the cold front, local weather became windy and fine with cool mornings on 27 – 28 December.

Typhoon Phanfone moved across the Philippines on Christmas day and tracked northwestwards entering the central part of the South China Sea on the next two days. Affected by the dry northeast monsoon, Phanfone weakened rapidly on 28 December and eventually became an area of low pressure over the waters off the coast of central Vietnam on 29 December. Under the combined effect of the northeast monsoon and the outer rainbands associated with the remnant of Phanfone, local weather became cloudy with rain on 29 December. The weather remained cloudy with a few rain patches and rather low visibility on 30 December. With a replenishment of the northeast monsoon reaching southern China, it was windy with a few light rain patches on the last day of the month.

Two tropical cyclones occurred over the South China Sea and the western North Pacific in December 2019.


Details of issuance and cancellation of various warnings/signals in the month are summarized in Tables 1.1 to 1.3.  Monthly meteorological figures and departures from normal for December are tabulated in Table 2.

Warnings and Signals issued in December 2019

Rainfall Map For December 2019 (isohyets are in millimetres) 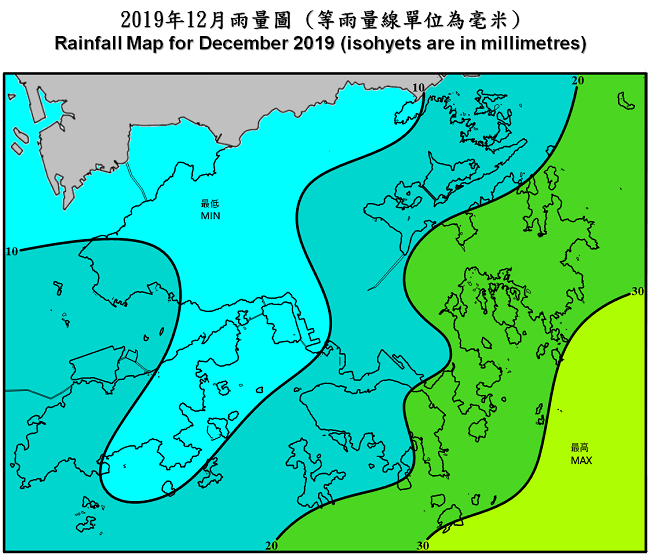 Extract of Meteorological Observations in Hong Kong for December 2019