The Weather of September 2020

Under the influence of a weak continental airstream, the weather of Hong Kong was generally fine and very hot on the first three days of the month. With plenty of sunshine, the maximum temperature at the Observatory soared to 34.2 degrees on 2 September, the highest of the month. However, high temperatures also triggered thundery showers in the afternoon over parts of the territory during these few days. Showery activity continued to affect the territory on 4 – 5 September. The heavy showers and thunderstorms on the morning of 5 September necessitated the issuance of the Red Rainstorm Warning. More than 40 millimetres of rainfall were recorded over Hong Kong Island, Kowloon and Tseung Kwan O and the rainfall even exceeded 100 millimetres over Southern District, Eastern District and Kwun Tong. In the midst of the downpour, the temperature at the Observatory dropped to a minimum of 25.2 degrees, the lowest of the month.

Under light wind condition, apart from a few showers and thunderstorms, it was hot with sunny intervals on 6 September. With a trough of low pressure lingering over the south China coast, the weather in Hong Kong became unsettled with occasional showers and thunderstorms on 7 – 12 September. The showers were particularly heavy on 8 and 12 September with more than 100 millimetres of rainfall recorded over Wong Tai Sin, Sha Tin and Sai Kung on 8 September and over 50 millimetres of rainfall over many parts of the territory on 12 September.

Under the influence of an easterly airstream, local weather was mainly cloudy with sunny periods and a few showers on 13 September. With the setting in of an upper-air disturbance, the weather became unsettled again with occasional heavy showers and thunderstorms on 14 - 15 September. More than 50 millimetres of rainfall were recorded over most parts of the territory and the rainfall even exceeded 150 millimetres over Sai Kung on 15 September.

Meanwhile, an area of low pressure gradually developed into a tropical depression over the southern part of the South China Sea on the night of 15 September and later named as Noul. It moved generally west-northwestward across the South China Sea and intensified into a severe tropical storm on the morning of 17 September. Noul made landfall over central part of Vietnam the next morning and weakened gradually into an area of low pressure over Indochina Peninsula on 19 September.

Locally, affected by the anticyclone aloft, it was hot with sunny periods and less showers on 16 September. Under the combined effect of Noul and the northeast monsoon, the weather of Hong Kong became mainly cloudy and windy with occasional showers and squally thunderstorms on 17 - 18 September. A broad trough of low pressure continued to bring showery weather and squally thunderstorms to Hong Kong the next day. With the strengthening of anticyclone aloft, the weather became hot with sunny periods and fewer showers on 20 September.

Five tropical cyclones occurred over the South China Sea and the western North Pacific in September 2020.

Details of issuance and cancellation of various warnings/signals in the month are summarized in Tables 1.1 to 1.5.  Monthly meteorological figures and departures from normal for September are tabulated in Table 2.

Warnings and Signals issued in September 2020 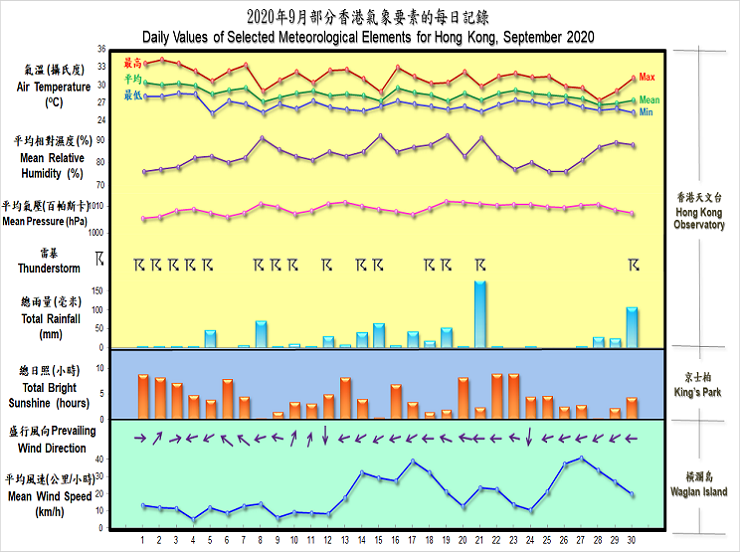 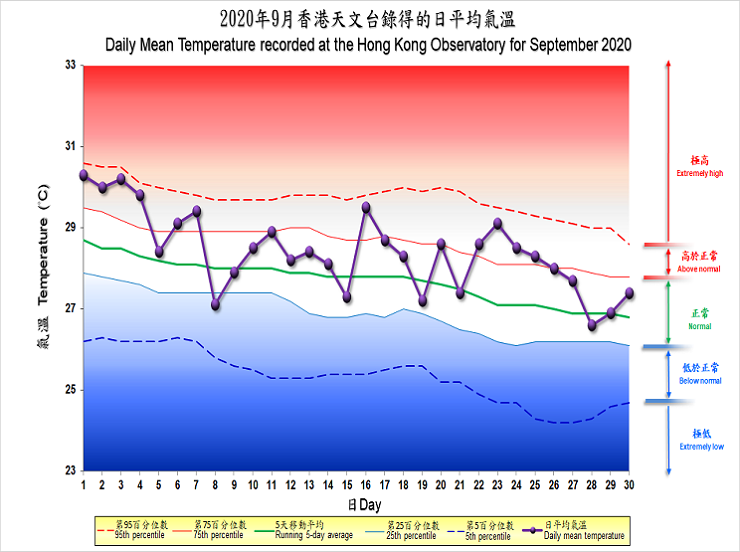 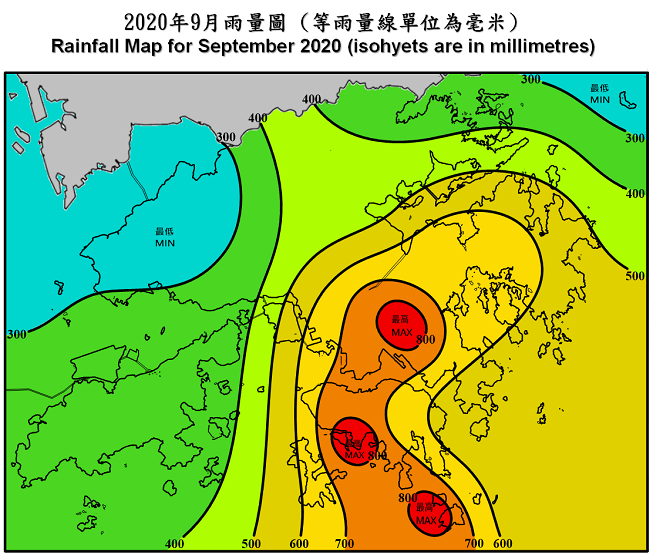 Extract of Meteorological Observations in Hong Kong for September 2020